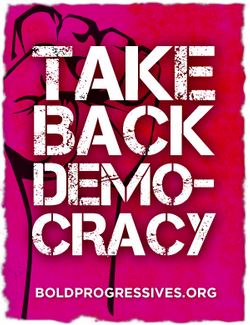 We have been following the work of the Task Force on Election Reform. We write to applaud your leadership and attention to the critical issue of campaign finance reform ai??i?? and to inform you that we stand ready to mobilize millions of Americans around strong legislation that brings forth citizen-funded elections for Congress.

For us, the goal of such legislation is to increase the power of ordinary Americans in our democracy and to incentivize candidates to spend their time talking with ordinary Americans instead of special-interest donors. We ask you to put the full weight of Democratic Leadership behind a bill that achieves those goals ai??i?? a bill such asAi??The Fair Elections Now Act (HR 269, Yarmuth)Ai??andAi??Grassroots Democracy Act (HR 268, Sarbanes).

While these two bills have differences, their core similarity is that they create a robust system of matching funds for candidates who opt to only raise small-dollar donations. This would be game changing. Candidates would be incentivized to spend their time courting ordinary Americans and would have dramatically less incentive to court big-money, special-interest donors. We understand that progress is being made on merging these bills into one, and we look forward to rallying the public around such a bill.

We cannot get behind legislation that has provisions similar to those inAi??Rep. David Priceai??i??s HR 270.Ai??By matching donations of up to $260 while allowing candidates to continue raising $2,600 donations, this bill would perversely incentivize candidates to call big-money, special-interest donors and say, ai???Have I got a deal for you. Normally, Iai??i??d ask you for $2,600. But now, if you give me $1,300, youai??i??ll get a 5-to-1 match on $260 of that and your donation will count as $2,600.ai??? Candidates would still court the same big-money donors they court now, but offer them a taxpayer subsidy. Ordinary Americans would not be newly courted or empowered. Such a bill all but promises not to achieve the core goals of citizen-funded elections, and we could not support it.

Furthermore, as you debate campaign finance reform, we ask you not to lump together groups that organize mass amounts of regular people around the public interest with small groups of big-money donors who have a special interest. One is the problem with our democracy while the other is the solution. Our system of campaign finance reform should incentivize the solution.

Relatedly, there is no reason that a committee funded by small-dollar donations from ordinary Americans should have lesser-prioritized speech in our political process than candidate committees or party committees. Advantages like Lowest Unit Charge for television ads should apply to any political speech that is funded with small-dollar donations. We would oppose any bill that enshrined new advantages to speech by political insiders over speech funded in small-dollar amounts by ordinary Americans. However, we agree that dark-money organizations that represent a few special-interest donors should not get such advantages.

As you move forward with your decision-making, we hope you will factor in these points. We are eager to work with you on citizen-funded-election legislation and to be strong grassroots partners in this effort.

Click here to sign on as a citizen co-signer of the letter for bold campaign finance reform.