No Arrests On Wall Street, But Over 7,700 Americans Have Been Arrested Protesting Big Banks

By Progressive Change Campaign Committee | Posted on May 21, 2013 | 1 Comment 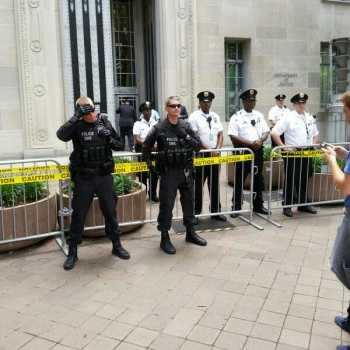 As Senator Elizabeth Warren (D-MA) has said, the nation’s biggest banks have essentially gained “too big for trial” status, and the federal government has failed to prosecute any executive at a Big Bank for financial fraud.

While Wall Street has escaped prosecutions, thousands of Americans have been arrested in the course of protests against the banks. Yesterday, at protests at the Department of Justice, at least 17 Americans were arrested — and there were more arrests today. In October 2011, one month after the start of Occupy Wall Street, at least 1,000 Americans had been arrested in these protests. As of May 2013, that number is 7,736 — according to the website Occupy Arrests, which tracks arrests.

Help us stand with these protesters.Ai??Click here to sign our petition to the Securities and Exchange Commission asking it to end ai???too big for trial.ai???