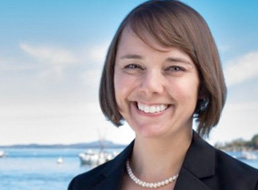 Shenna Bellows is former Executive Director of the Maine ACLU and played a leading role in Maine’s marriage equality fight.

We call Shenna Bellows the “Elizabeth Warren of civil liberties” because she’s campaigning boldly for U.S. Senate on constitutional freedom and economic populism.

This is a real David vs. Goliath race.

Some thought Senator Collins was unbeatable — until now. The political establishment is realizing that an insurgent progressive could defeat Maine’s Republican senator!

Susan Collins has voted against veterans, against seniors, and against strong Wall Street reform. She’s no champion for civil liberties. And she just came out against the president’s proposal to raise the minimum wage.

Can you add to her grassroots momentum? Donate $3 to elect Shenna Bellows to the U.S. Senate.