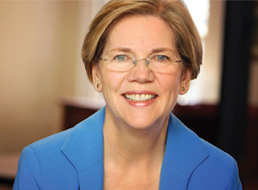 Elizabeth Warren demonstrated her fighting spirit by successfully creating a Consumer Protection Agency as part of 2009′s financial reform bill — and beating back an army of Wall Street lobbyists standing in her way to do it. After Warren helped set up the agency after financial reform passed, we helped draft Elizabeth Warren to run for Senate in Massachusetts, with our members raising over  $1.7 million for her campaign. In addition, over 70,000 potential volunteers and donors joined the draft and we ran online ads in support of the campaign.